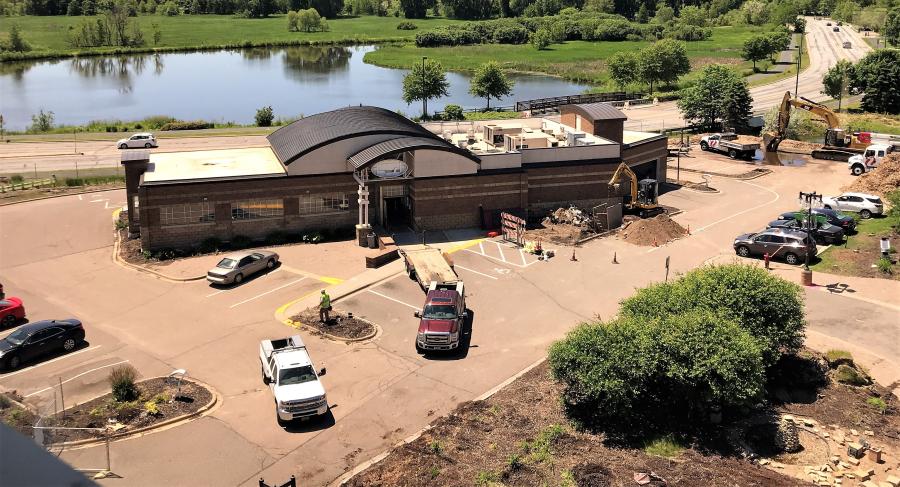 Southwest Station in Eden Prairie, on the southern end of the Green Line Extension. The station has only recently opened for bus service, with the rail line to come at a later date.

Despite not being ready until 2023, the people of the Minneapolis-St. Paul metro area have something worth looking forward to.

That’s when the newest light-rail line in Minnesota will be completed, designed to give riders in the southwest suburbs an easier, quicker and alternative way to reach the Twin Cities. Though the rail line may be light, it’s safe to say the project is simply massive.

Last November saw the groundbreaking for the 14.5-mile-long Metro Green Line Extension, better known as the Southwest LRT, but the first real heavy construction began in May after the Minnesota winter passed. The light rail service will run between Minneapolis and head southwest toward the towns of St. Louis Park, Hopkins, Minnetonka, Edina and Eden Prairie.

The project has an estimated price tag, when finished, of $2 billion — funded by a combination of federal, county, state and local resources. Included in the contract is the building of 16 new stations along the route, along with 29 new bridges, the modification of seven existing bridges, the construction of six pedestrian tunnels, two cut-and-cover LRT tunnels, 117 retaining walls and the placement of 153,000 feet of track. Officials expect the effort will create 7,500 construction jobs.

The SWLRT alignment will be installed through eight miles of a freight-rail corridor and 6.5 miles of greenfield land, which includes wetlands, undulating topography and roadways.

The scale and cost of the project makes it the largest in Minnesota history, according to the Metropolitan Council, the regional governmental agency in charge of the entire Twin City public transportation system.

The council is confident the ambitious benefits of the Green Line Extension will match the costs of building it.

“SWLRT will be a major transportation artery that will connect people to jobs, allow upward economic mobility, attract new development and residential opportunities, and create a one seat ride from the southwest suburbs to the many attractions in Minneapolis and St. Paul,” said Trevor Roy, senior communications specialist with Metro Transit, a department within the council.

Planners and designers are also betting the SWLRT, in combination with the area’s other public transportation services, will help alleviate the often-crippling traffic congestion on the Metro area’s roads and freeways.

A small amount of the light rail service runs adjacent to the area’s existing highways and roadways, but Roy added that one of the benefits of a shared-use rail corridor is the minimal impact on roads as an existing freight rail is already in operation. The alignment is not located in a traditional urban area, which also minimizes traffic impacts, he said.

The fast and quiet Metro transportation service is part of an integrated system of transitways, including connections to the METRO Blue Line, the Northstar Commuter Rail line and many bus routes.

Both the Blue Line and the current Green Line each saw their highest annual ridership ever in 2018. Nearly 13.8 million rides were transported on the Green Line last year alone, with more than 42,500 rides on average each weekday. The Metro Council projects 34,000 daily riders on the Southwest LRT when it is fully operational.

In anticipation of that, Roy said 27 sleek, light rail vehicles (LRVs) are currently being built by Siemens for the SWLRT. They will operate via overhead electrified lines and run on standard gauge tracks.

The first SWLRT station in Minneapolis is located adjacent to Target Field, home of baseball’s Minnesota Twins. The stop has served as a hub for other light rail and bus routes, and from there SWLRT riders will be able to continue along the established 11-mile-long Green Line east across the Mississippi River to the University of Minnesota campus and onto downtown St. Paul.

The new Green Line extension can also intersect with the Metro Blue Line at Target Field. That rail service can take them to a Minnesota Vikings game at US Bank Stadium or to other southern points such as the airport, before ending at the Mall of America station in Bloomington.

Crews Busy Up and Down the Line

The Metro Council is overseeing all of the work on the Green Line extension and have contracted with the Lunda/McCrossan Joint Venture, located in Black River Falls, Wis., and Maple Grove, Minn., respectively, for the civil construction portion of the project. Roy said a separate systems contract will be awarded later for the installation of electrical systems, communications equipment, lighting and overhead catenary lines.

In the meantime, construction is hopping across the entire alignment, including all bridge and tunnel work, Roy reported.

As the Southwest LRT will operate in a shared use corridor with freight rail, light-rail track will be constructed adjacent to existing freight rail. Therefore, one of the first jobs for the contractors was to build new tracks for the freight trains so they can continue operating in the shared corridor while the light tracks are being installed.

At another point on the SWLRT south end in Eden Prairie, the new Southwest Station recently opened as a bus park-and-ride facility until the light rail line is built and connected to it.

The following is a sampling of the multi-stage work zones along the Southwest LRT route that have seen increased activity in the last few weeks: