04 May âDiagnosis of dyingâ: How one manâs tumor exposes dee…

Pam Dahl had just driven four hours to visit her adult son, Derrick, at the southern Oregon group home where he received round-the-clock care. A gaunt man with dark hair and blue eyes, Derrick Dahl, 35, was diagnosed in childhood with developmental disabilities that leave him largely unable to communicate.

During the March 2018 visit, Dahlâs mother recalls a caregiver saying in passing that her son had been diagnosed with a dangerous tumor.

Pam Dahl was shocked. She pressed for more information.

She remembered the caregiver saying her sonâs tumor was discovered almost six months earlier but doctors thought surgery would be risky. Pam Dahl said she was told that the tumor could be deadly if left untreated. Doctors hadnât scheduled Dahl for an operation.

Successfully pushing for a fresh examination of her sonâs case led to another shock. A cancer specialist gave her hope Dahlâs tumor could be treated. She talked to a Portland doctor who was able to remove a baseball-size mass from Dahl during a November surgery.

âSomebody, somewhere, should have said, âYou need to get a second opinion,ââ Pam Dahl said of the care her son received. âYouâve just given this person a diagnosis of dying.â

Her effort to help her son highlights holes in a state safety net meant to protect vulnerable Oregonians who cannot advocate for themselves. It provides a cautionary tale for any family that lacks legal guardianship of a loved one who, because of a developmental disability, cannot make medical decisions.

The Oregonian/OregonLive spent six months investigating Derrick Dahlâs case to pinpoint why he didnât see a cancer specialist until his mother stepped in. The newsroom reviewed more than 3,000 pages of medical documents, business filings, licensing records and state rules for appointing health care decision-makers for adults with developmental disabilities.

The investigation uncovered such profound flaws in the system that state officials scrambled to fill gaps as the newsroomâs inquiry was underway, writing new legislation in March to formally endorse the process for the first time.

The Alternative Services employment and rental arrangements are legal, and the nonprofit says interested parties were not involved in approving them. There is no evidence the family member involved in Dahlâs care approached the role differently than other decision-makers. 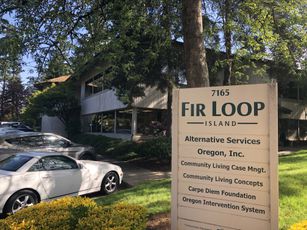 The Department of Human Services defended the stateâs track record of care while acknowledging room for improvement.

Lilia Teninty, director of Oregonâs Office of Developmental Disabilities Services, would not answer questions about Dahlâs case, citing his right to privacy. But she pointed to a recent study by national advocacy groups ranking Oregon the second-best state in America for serving individuals with developmental disabilities.

State officials similarly believe their process for appointing decision-makers is appropriate under current law. But prompted by the newsroomâs inquiries, Tenintyâs office is pushing Senate Bill 1039 to âstrengthen the statutory languageâ for making appointments within a system established two decades ago.

The legislation doesnât create any new qualifications for medical decision-makers, nor does it say how much independent medical expertise should be enlisted in cases like Dahlâs. In fact, while the bill for the most part is a carbon copy of department rules, it removes any direct mention of a second opinion as a factor for decision-makers to consider in weighing a major medical procedure.

People with developmental disabilities are more likely than others to face significant physical ailments, according to a federal report. They also face bigger barriers to receiving preventative care and…