Wrapping up business before year’s end, the Mountlake Terrace City Council during its Dec. 21 meeting passed a bevy of ordinances, approved a street vacation and the city’s Transportation Management Plan, and held discussions about supporting a local celebration of Martin Luther King Jr.’s legacy.

Councilmembers voted unanimously to approve continuing services contracts with two organizations for their federal and state lobbying efforts, an interlocal law enforcement agreement with the Snohomish Regional Drug Task Force, a one-month contract extension with City Attorney Greg Shrag, who will be retiring, and also contracting for on-call services to assist the Public Works Department.

A previously delayed public hearing regarding Sound Transit’s petition for the city to vacate a portion of its 222nd Street Southwest right-of-way concluded with the council voting to approve the vacation. The area to be vacated is at the intersection of 222nd Street Southwest and 62nd Avenue West, which lies under the Sound Transit light rail guideway under construction to extend service to Lynnwood.

Senior Planner Edith Duttlinger told the council that a review of the request found it would not deny any abutting property lots access to a public street, but the city would still need to retain a public utility easement for maintenance of a water main within the vacation area. Municipal staff recommended approval after determining Mountlake Terrace would be receiving a full market compensation of $160,000 for the land’s value and that the public’s interest would be served twofold by supporting the regional light rail system and then investing any compensation funds in open space or transportation capital projects within the city.

The purpose of the vacation ordinance is to help facilitate access to the light rail system’s infrastructure. It will eliminate a land-locked remnant of city right-of-way between the rail’s guideway and the western margin of I-5 in order to provide Sound Transit with ease of entry for operations, repairs and maintenance efforts.

Barbara Hinkle, Sound Transit’s project manager for the Lynnwood Link Extension, said that vacation of the undeveloped property would “effectively use public land instead of taking additional private land for the project,” which will help to minimize disturbances to residences and businesses.

Councilmembers also unanimously approved adoption of an update to the Transportation Master Plan (TMP). The city’s TMP was first adopted in 2007 and the update addresses local population growth, along with other changes in the future such as the introduction of light rail, development of the Town Center, and zoning modifications that will allow for greater densities under the state’s Growth Management Act. Since the TMP’s original implementation, Mountlake Terrace’s population — now at 21,420 — has increased by 6%. A population of 24,767 is forecast by 2035. 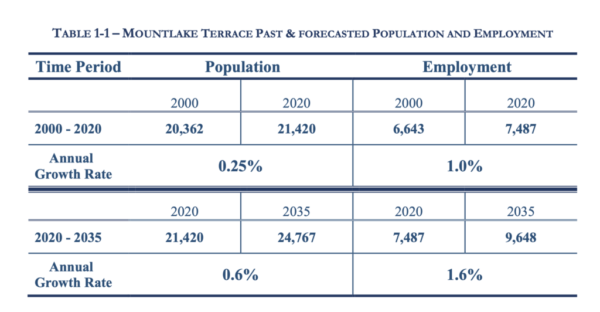 The plan’s update includes an analysis of Mountlake Terrace’s current transportation needs and serves to create a vision for the city’s transportation system to accommodate future demand while improving safe, efficient accessibility and mobility. As part of the Mountlake Terrace Planning Commission’s review process, the public had opportunities to comment on the TMP update through an online survey this year, which garnered 178 completed responses, and an online open house this fall in which 59 people participated.

Traffic Engineer Mark Seferian said the update’s development “was greatly enhanced with the critiques received from both stakeholders.”

An amendment of nearly $6 million to this year’s city budget was also approved by the council. It addressed three areas: spending of unanticipated federal CARES Act funds received, the need to increase funds transferred to the city’s recreation fund to offset reduced revenues amid pandemic-related closures, and construction of the Civic Campus project.

Finance Director Crystil Wooldridge said a majority of the total funds allocated in the amendment were for the Civic Campus project — due to the fact construction started later than originally anticipated last year and not because of any budget overages. This necessitated shifting the schedule for those funds from 2019 to the current year’s financial plan.

The city’s general fund required an increase of nearly half a million dollars after transferring out $800,000 to supplement the recreation fund’s loss of operating revenues amid program and facility closures from March to September.

City staff recommended the council adopt the budget appropriation amendment before year’s end, which is required by state law.

In other business, City Clerk Virginia Clough informed councilmembers of the Lodging Tax Advisory Committee’s recommendation for the use of city hotel/motel tax funds. The lodging tax funds are generated by overnight stays at the Studio 6 Hotel, located in Gateway Place, which is the city’s only lodging facility that collects hotel/motel taxes. The money is intended to be used for programs and events that will reach an audience beyond Mountlake Terrace and generate overnight stays in the city.

There were two applicants for use of the $25,000 total budgeted next year.

The Tour de Terrace organization requested $15,000 for its annual summer festival, which is scheduled for July 23-25, 2021. It submitted estimates for radio and print advertising to show how the funds would be used.

Because of uncertainty surrounding the pandemic and public gatherings, Clough noted that lodging tax funds are reimbursed to organizations by the city and that if moneys allocated are not spent, then they stay in the city’s…